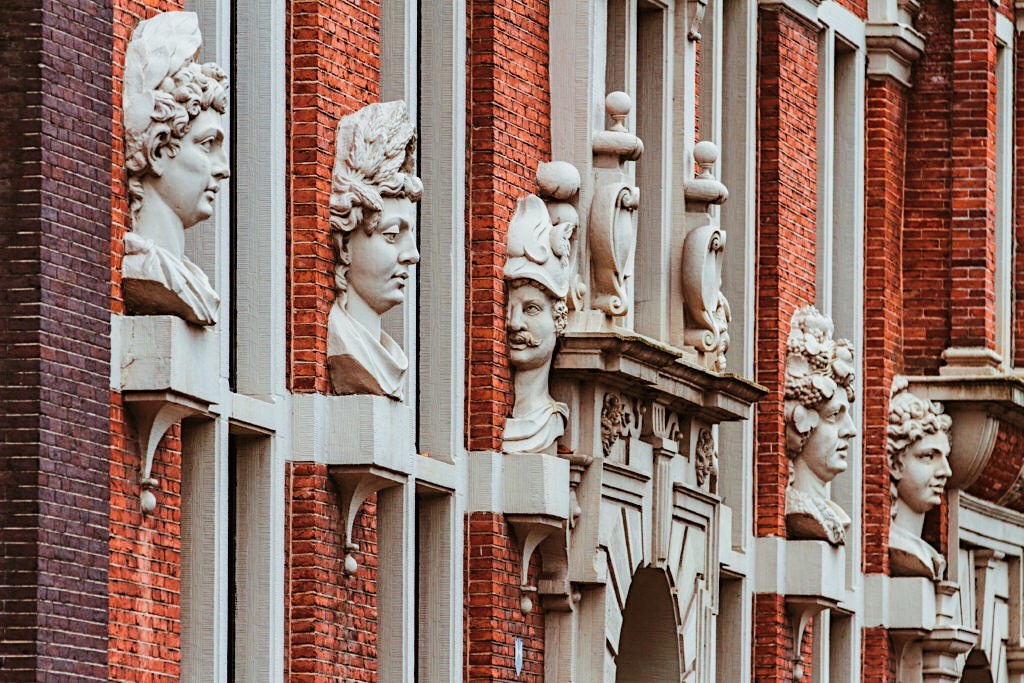 Just as every picture, almost all (monumental) façades and buildings in my beloved town tell a story. And like I told you a little while back, with over 7000 monumental buildings in the city center only, you might be able to imagine how extensive the history of these buildings are. I said it before and I’ll say it again, Amsterdam truly holds a rich and fascinating history. And even though I’m always impressed when I look at a classic façade, there are some extraordinary ones that deserve a little detour when you’re strolling through the city.

And if you’re into some more background information about some of Amsterdams finest architectural gems, you might want to check out this article I wrote a little while back, about the smallest and broadest facades in town.

So, today, I’ll tell you a little about six buildings that are truly something special.

Wooden house(s)
You might be thinking, what’s the thing between the Dutch and wood. First houses, then shoes. Well, back in the days, long, long time ago, this was the only way. However, all of these wooden houses that go back to the middle ages have unfortunately caught fire a long time ago. However, there often is an exception to every rule and this one ain’t no different. There are two wooden houses in Amsterdam left, with one of them hidden in a very lovely courtyard, called Begijnhof, in the heart of town. It was built around 1425 and therefore even is the oldest house in town!

Klein Trippenhuis
In the article I just referred to, I mentioned that the broadest façade of Amsterdam can be found on the Kloveniersburgwal. This building, called Trippenhuis, was built in 1666 for the brothers Trip. With a width of 22 meters, this one is quite impressive. So, if you find yourself admiring it from the other side of the canal, turn around and look at the small, white façade of just 2,44 meters. Legend has it that this little building was made when one of the servants of the brothers Trip mentioned that it would be a dream to even have a house, the width of the Trippenhuis’ front door. And so, folks, a kind reminder to be “careful” what you wish for, ‘cause you just might get it.

Huis Bartolotti
Back in the early days of the 17th century, an inhabitant of Amsterdam, called Willem van den Heuvel, was instructed to help built this incredibly impressive building on the Herengracht. When his wealthy uncle (related by marriage) without children passed, he all of the sudden became one of the wealthiest persons of town. There was one condition though, even though he was a Dutch as it got, his uncle was a proud Italian that insisted on carrying on his legacy and therefore demanded Willem to change his name to Bortolotti. And so, Willem became Guillielmo Bartolotti. If you look closely to the building, the Italian part of the story is used in the beautiful design of the façade.

“Zevenlandenhuizen”
A small city, that sometimes even has the coziness of village, yet with an international mindset, is one way to describe Amsterdam. And this international mindset is also seen in the beautiful Seven Nation building near Museum square. Architect Tjeerd Kuipers designed these houses in 1894 and it is inspired by seven different countries. From Spain to Germany, and from Russia to Italy, can you guess which house was inspired by which country?

It’s written in the stones
A little inconvenient is what I’d call it, as back in the days, they did not have house numbers yet due to the fact that people couldn’t read. House numbers only introduced when Napoleon was in charge of The Netherlands. Before then, gable stones were used to indicate the name or the profession of the person living there. Nowadays, you can still find hundreds of gable stones in Amsterdam and some of them or rather unique and a little odd, that you find yourself wondering about who it was that lived there. Two houses that are quite unique, not directly due to a gable stone or overall design, but a very clear add-on and description that also served well before the house numbers were implemented, are referred to as “the house with the heads” and “the house with the noses”. “The house with the heads” is located on Keizersgracht 123 and has a total of six gods and goddesses on its façade namely Apollo, Ceres, Mercurius, Minerva, Bacchus and Diana. The “house with the noses” is located on the Singel 116, with three faces of men with relatively prominent noses. Wonder what that meant back in the days…

And that’s it for today’s little story time. And before I let you go, I’d like to give you a kind reminder that especially in my beloved city, it’s a shame to look down and a joy keep your head up (always) and enjoy the beautiful sights and facades. Hope you enjoyed!