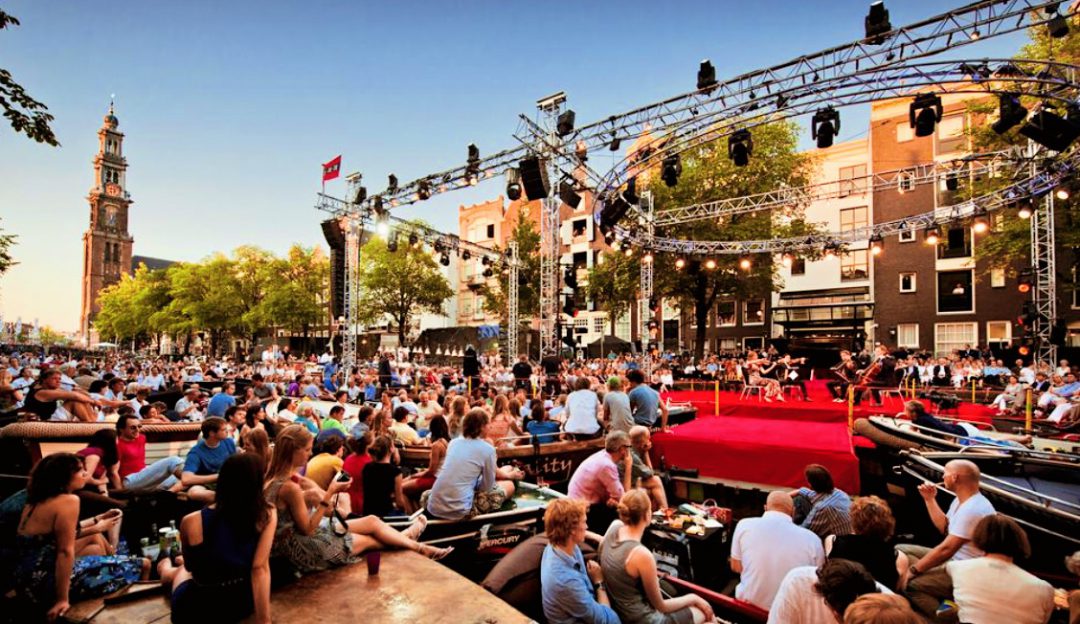 Lately, the weather has been leaving us hanging quite a bit… And with that, I naturally mean the sun has not been around as much as many of us would have hoped. However, this weekend a handful of my favourite annual events will take place which means that there is absolutely no room to cry over the weather. So, if you’ll be around in Amsterdam this weekend, you’re in for a real treat. Let me enlighten you!

Canal Festival Amsterdam – Throughout Amsterdam, 9th till 18th of August
Ever since 2010, this annual event celebrates classical music, jazz music and other kinds of music from different cultures for 10 days straight. Young musicians from all over the world have the opportunity to showcase their extraordinary musical talents and tell their stories. The past, future and now come together in contemporary combinations of musicians, genres and locations throughout Amsterdam.

Prinsengracht Concert – Prinsengracht, 17th of August
Personally, the highlight of the Canal Festival is definitely the “Prinsengracht” concert. With one of the most stunning canals of Amsterdam as “backdrop” to this classical open-air concert, this event is nothing short of enchanting.

Club Canal Festival – Vondel CS, 16th and 17th of August
But if you’re feeling a little groovier, you might be into “Club Canal Festival” at VondelCS, where they will be hosting slightly different kinds of concerts with a twist that are meant to encourage you to get up and show off your best moves!

Tapas Theater- 16th, 17th and 18th of August
I truly do adore some different sorts of events and perhaps slightly odd combinations. Tapas and theatre are not two things one would typically name in the same sentence, however, that’s the fun of it right? During this evening, the performances are referred to as the small bites, tapas, as all the shows are no longer than 20 minutes. In theatre terms, this is rather short. So, you can decide on visiting whatever genres or performances appeal to you. This way, you get to pick ’n mix your own evening program!

Cool Japan – Tropenmuseum, till the 31st of August
Konichiwa to all Japanese lovers out there! All “cool” things about Japanese culture are on display at the Tropenmuseum till the end of this month. Different aspects will be brought together: from proper Japanese arcades to fashion straight out of Tokyo and making your own paper koi carp. All by all, this means loads to see and do!

PLUK de Nacht – ’t IJ, 14th till 24th of August
Andddd yes, another (great!) open-air event that couldn’t be left out of the list: PLUK de Nacht film festival is back in town! Every year, this lovely festival plays the best (inter)national cinema that haven’t been released in Dutch theatres yet. And as stated earlier, the weather might not be perfect for an open-air film festival, but the organisation of PLUK de Nacht has arranged all sorts of precautionary measures such as extra parasols, some tents and a hot tub if you’d like. But no stress, if it unfortunately does happen to be raining, they will play the movie inside. Happy days either, if you’d ask me!

Latin Food Festival – Dok Amsterdam, 17th of August
Dok Amsterdam has been hosting some great events lately. This weekend is no exception as the Latin Food Festival will take place this Saturday. At 13:00 hour, you are able to experience the culinary world of Latin-America and the Carribean! And of course, the picture wouldn’t be complete if there would “only” be some great food, thus a couple of Latin DJ’s will bring some salsa and bachata to the party! Ai, ai, ai, me and my healthy appetite are so ready for this one…

De Parade – Martin Luther Kingpark, 9th till the 25th of August
Maybe I’m saving the best for last. And in this specific scenario, it wouldn’t be that unfair to accuse me of doing that as I’d love to end this edition of the Weekend Guide with “De Parade”: a travelling theatre festival that managed to capture my heart a couple of years ago already. This year, there are a lot of super interesting performances and shows to be seen and you might just find me there. For a couple of days. 😉 ‘Cause at “De Parade”, I do tend to have a serious case of FOMO.

I have this vague feeling that this weekend will become one of the best ones yet… Enjoy it to the fullest people!